Forty years ago, on March 15, 1977 (“The Ides of March”), the collapse of the Green Island Bridge made the national news. At about 2:25 pm that day, New York Telephone Company employees Bill McLaughlin and Larry Marinucci, Green Island native Rob Bouchey and a few others heard loud noises and realizing that the bridge was collapsing, sprung into action. They quickly stopped traffic from going on the bridge and were credited with saving many lives. They were honored by local officials afterward for their actions. Soon afterward, one span fell off and collapsed into the Hudson River. Five hours later, at around 7pm, the 85 foot west tower collapsed into the river as well. The collapse was blamed on old age and high waters from Spring runoff and 2.7 inches of rain the weekend prior. It was amazing that nobody was hurt as the bridge carried over 22,000 vehicles per day at that time. The collapse affected life in the Village for several years as we were isolated from downtown Troy. The present bridge was opened on September 12, 1981 and it cost $23,000,000 to build. Click on link to see rare video of the bridge taken shortly after the collapse: https://youtu.be/9gXd6qb_LwY 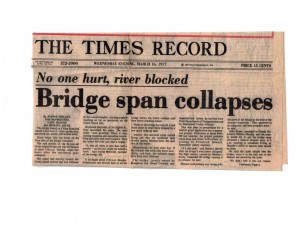 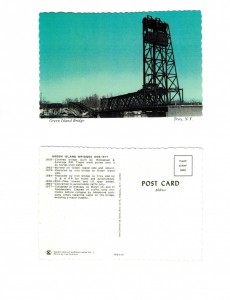 *Information was compiled from media reports