In August, 1919 a quartet of friends styling themselves the “Four Vagabond Gentlemen” decided that their summer motor camping trip would be to Green Island, a site near the new Federal Dam being constructed on the upper Hudson River, a short distance north of Albany, NY. The group included the three leaders of American industry at the time: Henry Ford, Thomas Edison and Harvey Firestone as well as naturalist John Burroughs. 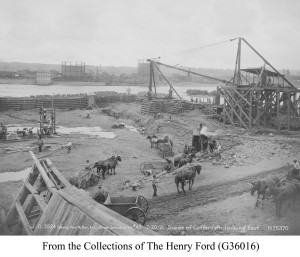 At Green Island, Ford was inspired by the possibility of harnessing the water at the new Federal Dam to produce hydroelectric power. He decided to purchase 189 acres of adjacent land. Henry Ford and Sons applied to the Federal Power Commission for a license to build a plant for private use, which was granted on March 3, 1921. At Green Island, the self entitled “vagabonds” led by Henry Ford carved their names into a stone, which was later used as the cornerstone of the Ford Motor manufacturing plant located on the site. The announcement that Ford was building his largest plant to date in Green Island, which was completed in 1923, was carried by major national newspapers, including the New York Times. Powered by the hydroelectric facility on the Hudson River for more than a half century, the Green Island Ford Plant grew to serve as Ford’s key facility for the company’s Engine & Foundry division. until it was closed in 1988.